Ahead of Oxjam Notting Hill’s grand finale on 19th October, they are hosting a film screening of Legacy in the Dust: The Four Aces Story at the pop up cinema on Portobello Road on 3rd October. 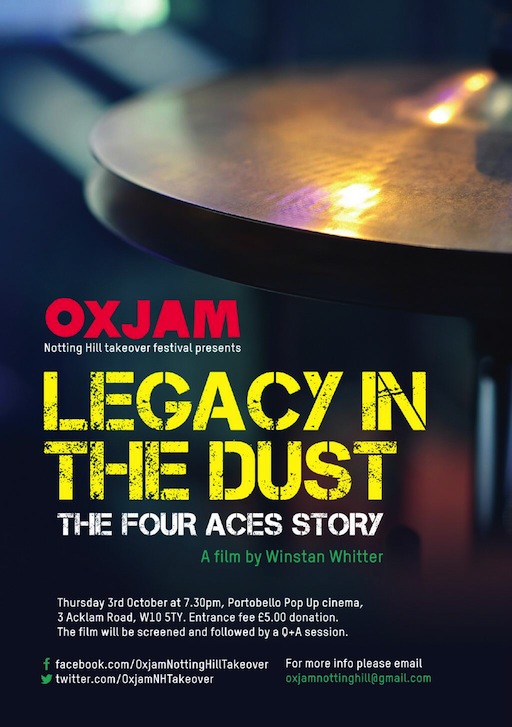 In the 1960s Mr. Newton Dunbar arrived in the UK from Jamaica and founded one of the first Reggae-oriented music venues called ‘The Four Aces Club’, which for some 33 years was home to the most influential black music and musicians to date.

The club’s success led to regular raids from the local Police, which gave it a bad reputation, and the press targeted the venue as ‘A Yardie Drug Club’. Despite the negativity that clouded the club it went on to pioneer the early indoor Rave scenes called ‘Labyrinth’ in the late 80s during the days of Acid House, Happy Hardcore, Drum & Bass and Jungle music. It hosted artists like The Prodigy, Ratpack, Ragga Twins, DJ Slipmat, Billy Bunter, Vinyl Matt and Kenny Ken. Eventually the venue was forced to close its doors in the late 90s due to a compulsory re-possession ordered by the local authorities.

Those attending the screening are asked for a donation of £5, with all money raised going towards the Oxjam Notting Hill total. The producer of the film, Winstan Whitter, will also be hosting a Q & A session after the film.

Tickets for the main Oxjam Notting Hill Takeover event are also now on sale. Taking place on Saturday 19th October, Oxjam Notting Hill will – almost literally – be taking over Notting Hill! Live music and DJs will be performing at a number of top venues on the night, with all sorts of musical genres and styles for you to enjoy – everything from reggae to rock, and much more in between. Buy your tickets now at www.wegottickets.com/event/239792.

There’s little over a week until the 2013 Notting Hill Carnival (how has it come around so soon?!) and there’s of course plenty of exciting Carnival-related events being lined up in addition to the main event. One of these is the next instalment of Oxjam Notting Hill’s live music events, following on from their launch party in late June – and in the run up to their big finale on 19th October. (You can read more about Oxjam Notting Hill – and the main aims of Oxjam as a fundraising scheme – in our previous post at Oxjam Notting Hill launches this Saturday, 29th June!) 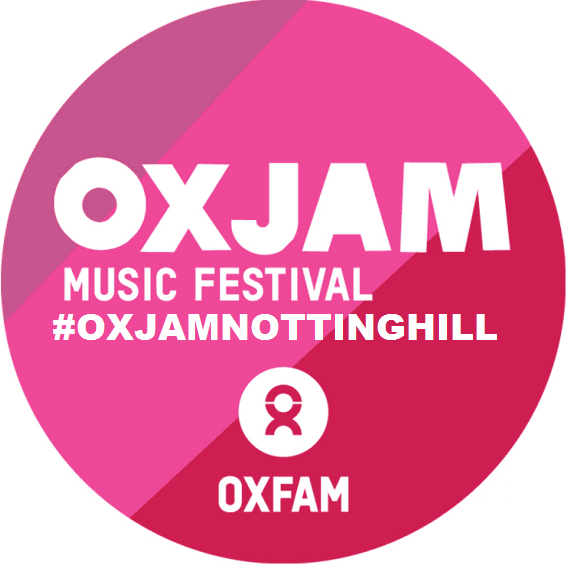 On Monday 26th August, Oxjam Notting Hill will be hosting a Notting Hill Carnival Afterparty at the newly revamped bar The Playhouse on Kensal Road. (Seeing as it’s located right by one of the main entry/exit points of the Carnival, you won’t have far to go to carry on with the party!)

A fantastic line up of DJs will be spinning a variety of tunes and sounds, serving up some Afro Beats, Soulful House, Tech House, Dubstep and more. The line up includes DJ Afro Grooves who plays the best of Funk, Latin, Jazz, Salsa and Afro Beats – catch him on Genesis Radio; TomMacTom – fresh from playing at the Secret Garden Party – with some tech-house flavours; southeast London DJ/producer Kleva Keys with his mix of deep and soulful house; and international DJ LDGBASS, who established the Dubstep floor at London’s longest running and biggest rock club night, Voodoo Rock.

Join Oxjam Notting Hill and this awesome line-up of DJs for a night of top music and Carnival-style partying, raising money and bring awareness to Oxjam and Oxfam!

This Saturday at Portobello Road’s excellent Mau Mau bar, Oxjam Notting Hill will officially be launched with an evening of music from a host of talented artists and DJs, including Lizzie Nightingale, Clencha, Pyrelli, DJ Sam Young, Afro Grooves and Ray Domingo.

Saturday’s launch party kicks things off for Oxjam Notting Hill, who will be hosting a series of gigs over the next few months leading up to the big finale on 19th October 2013. 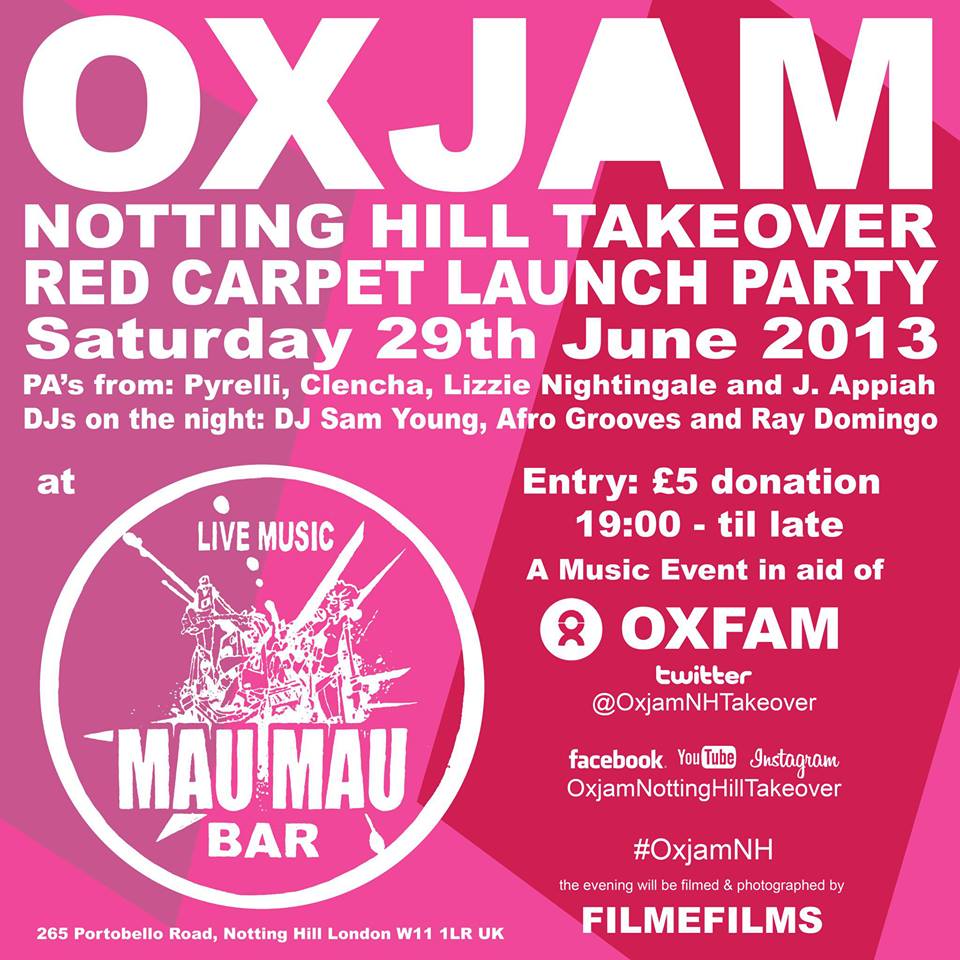 Oxjam was launched in 2006 as a way of raising money for Oxfam through music. Its success since then is clear to see, with over one million people having attended an Oxjam gig, over 3,500 Oxjam gigs taking place in the UK and over £2 million raised for the charity. Oxjam sees gigs and music festivals being hosted over a whole month, uniting music lovers and musicians and raising money to help aid poverty and end global suffering.

It’s Oxjam Notting Hill’s first year this year, and they aim to showcase some of the best up and coming musical talent from a range of genres – everything from folk to funk to afro beats and blues.

Saturday’s launch party costs £5 (donation) and starts at 7pm, going on til late!

For more details on the event and to learn more about Oxjam Notting Hill in general and how you can help support them, check them out on Facebook and Twitter. 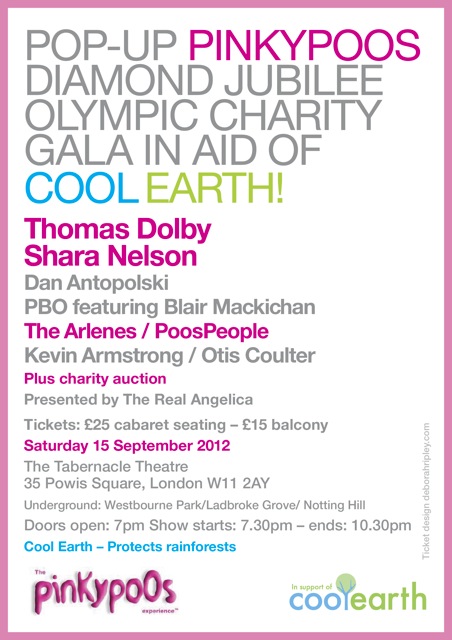 Fresh from his sell out tour, 80s synth pioneer Thomas Dolby will be headlining the event, which will be his only London date. Also on the line-up is Shara Nelson, who will be performing the amazing “Unfinished Sympathy”, and funkadelic dance band The PBO, as well as well-known stand-up comic Dan Antopolski, and many more.

Cool Earth is a climate change charity that’s headed by Vivienne Westwood and has a number of high profile supporters, including Pamela Anderson. All proceeds from the night will go to charity.

Tickets cost £25 for cabaret seating, or £15 for balcony, and can be purchased by emailing angelica@squirrelmountain.com.