The Carnival – the second largest street festival in the world (behind Rio, fact fans) – takes place over the Sunday and Monday on the last weekend in August. The Monday of this weekend is always a Bank Holiday (public holiday) in England so everyone can party away to their hearts’ content without skiving off work. (This isn’t why we have a public holiday, but it’s certainly as good a reason as any.) 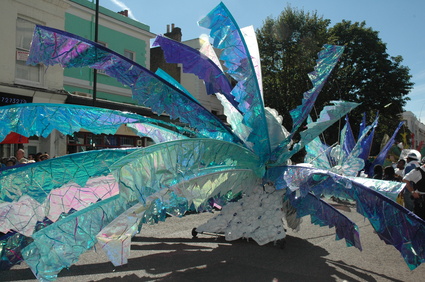 History of The Notting Hill Carnival

The emergence of the Notting Hill Carnival followed from racial tensions that were prevalent in the area in the mid to late 1950s; Britain’s first race riots broke out in Notting Hill in August 1958. The Carnival emerged as a response to them in January 1959 as an indoor event organised by political activist and community leader Claudia Jones – this first event was actually held at St Pancras Town Hall (now Camden Town Hall) on Euston Road.

It was in the mid 1960s that something resembling the Notting Hill Carnival that we know and love today first took place. Another lady, Rhaune Laslett, had organised a children’s street festival in 1966 that would also work to promote cultural unity amongst the run down area’s many ethnic groups – the Afro-Caribbean population and others – and this early edition did see costumes, floats and live music. The parade element suddenly sprung to life when a steel band player named Russ Henderson (who had in fact played at the indoor Carnival in 1959) started a musical march with his band. The first event attracted around 1,000 people. Ms Jones, the organiser of the event in 1959, had unfortunately died in 1964 at the age of only 49 so never saw this first outdoor Carnival.

Through the 1970s, the Carnival grew considerably in popularity – with 150,000 people already attending in 1976 – as well as becoming more Caribbean in flavour. In some years, however, riots and violence often broke out (and often because of its “unofficial nature” as a mass event, which lasted up until 1987) which meant that Carnival often received negative press. These days, the Carnival is (perhaps unfortunately, but certainly understandably) and much more organised and official affair, which means there’s very little trouble (if any), and a general good mood and party atmosphere!

As mentioned, these days the Carnival is held over two days – the last Sunday and Monday in August. Sunday is traditionally considered to be the “Family Day” with a children’s parade taking place, whilst the Monday sees the main parade with its wonderfully costumed dancers and bands! The parade route takes in some of the main roads of the area, including Ladbroke Grove, Kensal Road, Great Western Road and Westbourne Grove.

Numerous sound systems and stages are set up by the parade route and in the area providing typically Carribbean music, as well as that more pop-chart orientated! You’ll also find many stalls selling food and drink to help get you in the spirit; many of the local bars and pubs will be open and hosting special themed events.* With around one million people joining in with the fun, it’s a couple of days of ecstatic partying in West London. Just don’t forget your whistle!

*Do also note that some businesses – including bars and pubs – shut up shop for the weekend (sometimes literally, with some places being boarded up). With so many people crammed into such a small area, it can get a little overwhelming for some local businesses. Just bear that in mind!

This year’s Carnival is on Sunday 30th and Monday 31st August 2015 – can’t wait! Take a look at our blog post on this year’s event for a number of useful links if you’re planning on visiting the carnival.

Notting Hill Carnival
A tonne of useful information on the Carnival, including plenty of great photos