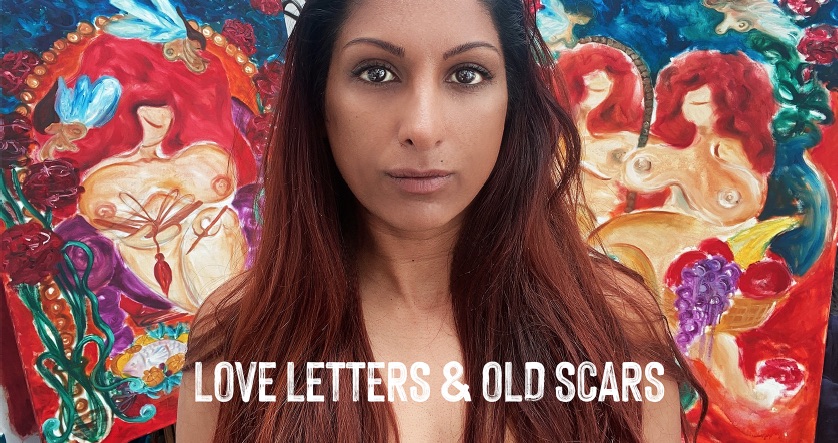 In partnership with Kensington & Chelsea Art Week and Festival, gallerist and artist Saira Jamieson will be presenting her exhibition of paintings titled “Love Letters + Old Scars”. The exhibition will be held 11am – 6pm daily from 28th June to 4th July at J/M Gallery, 230 Portobello Road, W11 1LJ.

The week-long exhibition will feature 17 artworks, all a combination of oil on canvas paintings and minimalist abstract “lines”. Saira will also, for the first time at one of her shows, disclose and display her personal sketchbooks from the series. The journals show Saira’s intimate research and her development behind “Love Letters & Old Scars”, from preliminary sketches and trials to historical references and diarised thoughts.

On the 4th July, the final day of the exhibition, Saira will be hosting a Sunday Brunch Q&A from 12pm to 3pm. She will be inviting discussion and conversation on the plights of freedom that women face, the shackles of judgment and the healing power of love letters.

Saira was born in London to Pakistani parents and raised in a household of immense cultural pride and deep religiosity – two sources of inspiration and rebellious fuel for Saira’s early artistic impulses.

Through painting and drawing, Saira found escapism, creating otherworldly terrains of symbolism. Her diarised sketches became a secret language, one her parents couldn’t decipher, one they didn’t approve of. Caught between family duty and the associated expectations of dutiful femininity, Saira fled to Portsmouth University to study film and semiotics. This was eventually agreed to be a short stop gap before she would assume the role of wife. Yet instead, her passion for artistic filmmaking, for the art of documenting and the power of storytelling, would compel Saira to fight to complete her studies and subsequently follow an entirely different path.

Realising independence and her own financial success would be required as the price of ultimate freedom, Saira took on the battle that came with going against the cultural tide. Working relentlessly to establish herself as a sought-after Media and Interactive Producer (working on Live 8, alongside Bob Geldof, amongst several award-winning titles), becoming a respected businesswoman by founding her own brand-tech-events company and investing in businesses across media and hospitality sectors. While creativity and innovation were the cornerstone of her professional trajectory it would be a second, chance awakening: a collaboration with a film called Yugen – paradoxically meaning the spiritual power to evoke a predetermined path – by Salma Hayek and Martha Fiennes, that would bring her back to her underlying passion of semiotics and making art.

It was at this moment Saira allowed her roots to be set free and it would be her life’s experiences that would provide the rich narrative to her own work.

“The series is inspired by the chance discovery of long-lost diaries and a further reveal of a hidden entry glued between pages. The text described a devastating moment of lost hope, a realisation that the freedom I desperately craved was futile.

A buried memory surfaced like a tornado in my heart.

I longed to speak to this girl, my younger self.

On the following final page, I wrote to her. This love letter spoke of gratitude for gathering strength to continue to fight, for succeeding, for all the incredible things we went on to achieve and a promise to our daughter; she would know our history and champion freedom as a basic human right.

These works are very much love letters to all women that have had to fight for their freedom.

You can book tickets online for the exhibition or the Sunday Brunch Q&A.

We use cookies on our website to give you the most relevant experience by remembering your preferences and repeat visits. By clicking “Accept All”, you consent to the use of ALL the cookies. However, you may visit "Cookie Settings" to provide a controlled consent.
Cookie SettingsAccept All
Manage consent

This website uses cookies to improve your experience while you navigate through the website. Out of these, the cookies that are categorized as necessary are stored on your browser as they are essential for the working of basic functionalities of the website. We also use third-party cookies that help us analyze and understand how you use this website. These cookies will be stored in your browser only with your consent. You also have the option to opt-out of these cookies. But opting out of some of these cookies may affect your browsing experience.
Necessary Always Enabled

Performance cookies are used to understand and analyze the key performance indexes of the website which helps in delivering a better user experience for the visitors.

Analytical cookies are used to understand how visitors interact with the website. These cookies help provide information on metrics the number of visitors, bounce rate, traffic source, etc.

Advertisement cookies are used to provide visitors with relevant ads and marketing campaigns. These cookies track visitors across websites and collect information to provide customized ads.

Other uncategorized cookies are those that are being analyzed and have not been classified into a category as yet.