Featuring 10 bouts (5 x safety, 5 x full contact), this charity fight night is being held in aid of The Dalgarno Trust, a local community development organisation. The first event of this type for the charity, this promises to be an enthralling night of white collar boxing between local boxing clubs (Stonebridge Boxing Gym, Kings Urban Boxing Gym, Gym Box and Star Gym) and some of the best athletes in the area.

The Dalgarno Trust delivers a wide variety of services in the local community that help health; children, youth & family; enterprise; community engagement & education; and learning & employment. Through a range of services and activities that offer education, employment and training opportunities, they enable people from diverse backgrounds to change their lives, fulfil their potential and break the cycle of poverty, ill health and deprivation. They also seek to create strong, inclusive and active neighbourhoods and to develop long-term, sustainable communities through social enterprises, small business and entrepreneurial activities. 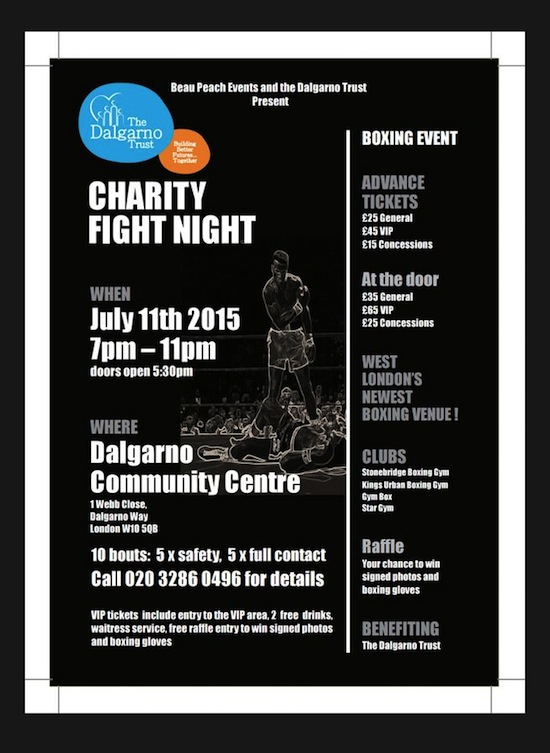 Now in its 13th year, the annual Notting Hill Mayfest returns to the streets and venues of the area next month, offering a full line-up of exciting events with something for everyone! What started as a small community festival centred around the popular May Fair is now a month-long, multidisciplinary arts festival – with music recitals, film screenings, children’s events, a tea dance, area tours, lunchtime concerts, talks and much more.

One of the best known events of the Mayfest, as mentioned, is the May Fair which will take place at St John’s Notting Hill on Saturday 9th May, 1pm to 5pm. One of Notting Hill’s best loved events, which has taken place annually for over 25 years, the Fair is well known for its traditional village games and stalls, music, Maypole dancing, a fancy dress competition and dog show. A true family event with something for all ages – including a vintage coconut shy, face painting and even a bouncy castle!

On Wednesday 6th May, Dr William Taylor – Vicar of St John’s Notting Hill – will give a big screen presentation of his recent three-month journey along the Silk Road, during which time he travelled light and stayed with monks and hermits. The evening will include music, dance, food and drink inspired by Silk Road. This will also be the launch event for THE SPACE at St John’s, which will showcase the new community, arts and business facilities within the church. More details on THE SPACE and its use can be found at www.stjohnsnottinghill.com/thespace/.

On Friday 15th May, the silent classic Steamboat Bill Jr (1928), starring Buster Keaton, will be projected onto the big screen at St John’s Notting Hill with music accompaniment by the church’s recently restored organ. This follows a screening of the classic film Wings (1927) last year in what was a sell-out show.

Other highlights of the Mayfest include Love Your Local Market tours of Golborne and Portobello Markets (selected dates); the Bach to Baby classical concert for adults, babies and tots (19th May); the Flores de Mayo/Santacruzan Parade, a traditional festival of the Philippines (30th May); and a Tea Dance that will feature a number of different ballroom dancing styles (23rd May). The Mayfest will also see another opportunity to climb the tower at St John’s Notting Hill (16th May) for panoramic views across the area.

There’s of course plenty more happening during Mayfest as well, and many events are free to enter (or very affordable indeed!). The Notting Hill Mayfest also showcases some of the best known venues in the area, including St John’s Notting Hill, St Peter’s Notting Hill, St George’s Campden Hill, The Gate Theatre, and The 20th Century Theatre, and it’s a lovely chance to experience a variety of cultural events at these locations.

For a full line-up of all the events taking place during Mayfest (and to book tickets, where appropriate), please see www.nottinghillmayfest.org.uk.

Transforming the 20th Century Theatre into a speakeasy next week, Pop Up Screens return with a fantastic cocktails & movies event featuring some of your favourite films.

Tickets for each screening cost £22 which includes three cocktails, a little alcoholic sweet treat and some nibbles too. There’s also alcohol free cocktails as well – tickets for the virgin cocktails option cost £14.

During each screening, visitors will be encouraged to ‘taste what they see’ and given prompts for when to eat and drink during the film. So if you come to see The Big Lebowski, you can sip on a White Russian; for Cocktail, you can sample a Red Eye (beer, vodka and tomato juice); and for The Goonies, a Baby Ruth Hard Milkshake (vanilla milkshake, Baileys, hazlenut liquor) with a Baby Ruth Bar. For When Harry Met Sally, the cocktail couldn’t be anything but A Screaming Orgasm, whilst it’s obviously a Sex Panther (Triple Sec, Drey Vermouth, Vodka, Grenadine and orange juice) for Anchorman!

The line-up of films:

“Cocktails are cool. Movies are cool. Put them together and you get something doubly cool. Well that’s the thinking anyway! It’s exciting (and possibly a little scary) to be doing something so different to our normal screenings.”

For more details, and to buy tickets for any of the screenings, please see www.popupscreens.co.uk.

Following on from a successful and popular autumn series of concerts, ASPECT Foundation for Music and Arts returns to Notting Hill and Kensington in 2015 for a set of events that will take us right up until June. Concerts will feature artists such as Mahan Esfahani, Rachel Podger, The Endellion String Quartet and Ferenc Rados with speakers including Norman Lebrecht, Ruth Padel, Stephen Johnson and Misha Donat. Taking place in the beautiful twin venues of the 20th Century Theatre on Westbourne Grove and Leighton House, close to Kensington High Street, ASPECT’s spring season is sure to deliver a wonderful, entertaining and illuminating series of evenings.

As ever, ASPECT’s concerts present ‘Music in Context’ – that is, each event combines performance, lecture and discussion in such a way that the audience experiences not only a music recital, but also an inspiring and enlightening mix of art history and social culture. Thought-provoking and inspiring, ASPECT’s events are more than just a concert! The 2015 Spring Season will feature concerts on three different themes – Musical Capitals, Words of Music and Composers on Composers.

The first event of the year is titled Berlin: The Age of Enlightenment and will take place on Saturday 24th January  at the 20th Century Theatre. Part of their Musical Capitals series, the evening will see Sonata in D major for viola da gamba and harpsichord, Wq. 88 (C.P.E. Bach); Trio Sonata in A minor, QV 2:Anh. 34 (Quantz); Sonata in C major for flute and basso continuo, SpiF 40 (Frederick II (‘the Great’) of Prussia); and Trio Sonata in C minor from The Musical Offering, BWV 1079 (J.S. Bach) performed.

To start the evening, speaker Norman Lebrecht will discuss what it takes to be a musical capital and examine how Berlin now stands as something of a cultural hub, home to ‘the world’s finest orchestra’ and the greatest number of world-class opera houses in one city, as well as a diverse alternative music scene. Following this, award-winning harpsichordist Mahan Esfahani will explore Berlin’s musical origins: from Frederick the Great’s musical consolations, the musicians and great minds he gathered around him, and those he drove away. The evening will also feature Rachel Brown (flute), Madeleine Easton (violin), and Richard Boothby (viola da gamba).

On Wednesday 25th February, Beethoven: Twenty-Five Years of Quartet Making at the 20th Century Theatre will feature one of Beethoven’s earliest string quartets as well as one of his last, both performed by The Endellions. The quartets will frame readings by poet Ruth Padel of new works that meditate on the time and circumstances of their creation.

Monday 2nd March will see Bellini and Chopin: Weeping in Song at Leighton House. Tenor Gyula Rab plus pianists Thomas Harris and Aldemir Tokov perform tonight as prize-winners at the Musical Odyssey international summer masterclasses for pianists and singers; the three were awarded the opportunity to participate in an ASPECT concert because of their outstanding musicality and the evidence they gave of their potential to develop careers in the international music industry. Christie’s Education senior lecturer Patrick Bade will also be giving an illustrated talk.

London: Eighteenth-Century Court and Salon Music will be performed on Wednesday 13th May at 20th Century Theatre. The vibrant theatre, chapel and chamber music of seventeenth and eighteenth century London will be explored with performances from Rachel Podger and Brecon Baroque and a talk by speaker Richard Wigmore.

On 10th June at The 20th Century Theatre, Schubert: In the Footsteps of Beethoven will see legendary pianist Ferenc Rados performing with ASPECT for the first time, with Misha Donat providing an illustrative talk.

All concerts commence at 7.30pm. Tickets for concerts cost £25, which includes wine and refreshments. Tickets can be purchased by calling the box office on 07799 090826 or by booking online at www.aspectfoundation.net.