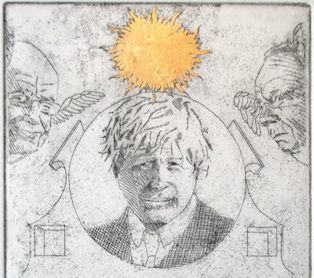 Alexander Massouras: New for Old at The Tabernacle, 15th to 21st July

Artist Alexander Massouras’s will be showcasing a number of his recent works at a free exhibition at The Tabernacle next week, that will also see him giving a talk and a book signing on the Saturday.

In his largest show to date, the exhibition will showcase paintings, drawings and etchings, including a series of over twenty etchings that were completed this year; a recently finished series of five paintings of sunlight; and a survey of early diver work. This eclectic collection will range from satirical etchings of famous figures such as Boris Johnson and David Cameron; minimalist paintings of divers; and tiny landscapes dotted around the gallery, culled from estate agents’ adverts.

On Saturday, 20th July, Alex will also be giving a free talk about his work and signing copies of Three Moderately Cautionary Tales (www.amazon.co.uk/Three-Moderately-Cautionary-Tales-Etchings/dp/0957012403). This book displays a series of fifty hard-ground etchings in three cycles, with each cycle loosely following the narrative arc of an epiphany. The etchings draw their imagery from a wide range of unusual sources, such as Eadweard Muybridge, Jorge Luis Borges, magazine images, pictures from e-bay, Old Master paintings, Wittgenstein, Kurt Schwitters, and the artist’s nephew.

Alexander Massouras is a self-taught British artist whose latest two prints – the above-mentioned satirical portraits of Boris Johnson and David Cameron (titled The Sun King and Camerondias – as seen below) have been acquired by the British Museum. The two etchings were a collaboration between Alexander and the poet Luke Wright, intended as a comment on contemporary Britain through old literary and artistic compositional forms. 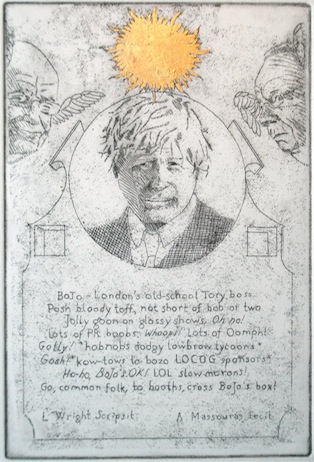 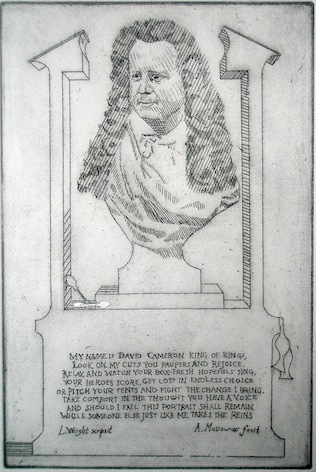 Connoisseurs of printmaking should also pay homage to Alexander Massouras, at Multiplied with Julian Page Fine Art. New this year from Massouras are “Camerondias” and “The Sun King”, beautifully etched teases of David Cameron and Boris Johnson accompanied by verses from poet Luke Wright, that evoke 18th-century satire.

The full review can be read here.