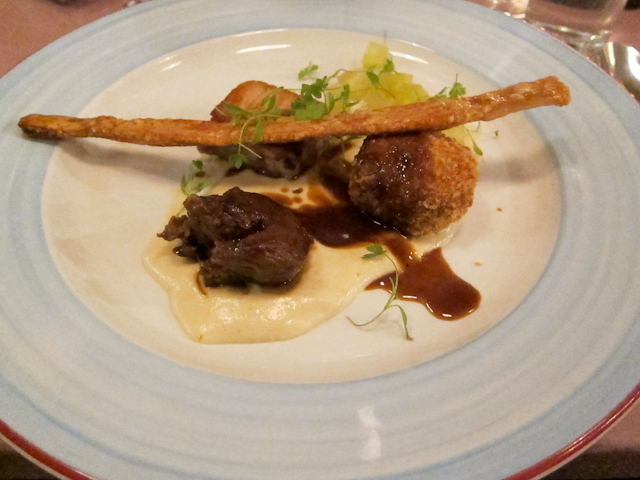 I was rather excited to attend my very first supper club (or pop up restaurant!) on Wednesday night  – one that’s soon to be taking place on our doorstep for its next instalment!

A Grub Club event, the wonderful Fab Cuisine is run by French chef Fabrice Meier with fellow foodies Antonia and Katrina. Originally from Switzerland, Fabrice has previously worked in many fine London establishments, including One-O-One in Knightsbridge, and worked his up to be head chef in a venue in Chelsea.

On this particular occasion, we were hosted at the Social Pantry cafe in Clapham. Typically of a Grub Club event, this cafe is open during the day only – meaning it’s the perfect “unused” venue for an evening supper club. And it hosted Fab Cuisine very well, seating 28 of us (the event was sold out – of course) across three large tables.

As with many Grub Club events, Fab Cuisine was a BYOB affair. We were emailed prior to the event with a few recommendations for wine – both red and white – that would go together with the particular courses, as well as a sweet wine that paired well with the dessert. Being slightly time-short, I wasn’t quite able to source them (although I imagine those that did were rewarded, palate-wise!) although I had taken inspiration from the recommendations to bring along a Pinot Noir. Of course, there weren’t any restrictions in what you could bring, and I did notice someone with a posh pack of beers too.

After a welcoming glass of prosecco (although when isn’t prosecco welcoming?) we took our seats and were encouraged to get to know our neighbours, as these supper club and Grub Club events are especially social. The one thing that did strike me was the number of larger groups that were in attendance – and by that I mean that there quite a few groups of four, five or even six friends. Clearly, it’s a great place to socialise with those that you don’t know, but also those that you do! Some of those I talked to had also been to previous Fab Cuisine events too – so it seems to be the kind of evening that draws in repeat guests. (I can certainly see why!)

On to the food – that’s why we went, right? And with four courses and a palate cleanser, I had better start talking about the meal! After a very nice introduction from chef Fabrice, we started things off with a Jerusalem artichoke soup with crisps. The smooth flavour of the soup and the delicate few crisps bobbing in it proved to be an enticing light opener that left us eager to try the next course. Squid ink risotto is one of my favourite dishes; this may well the first time I’ve tasted this dish where it didn’t have – pleasingly – an overpowering fishy taste in the slightest. The slab of seared squid lain on top was equally fish-taste-free, and its slightly spongy texture worked supremely well with the delicate risotto rice. The gremolata topping turned out to be a mixed herb and garlic type of condiment (not what any in our near vicinity had guessed at!) which gave the whole plate an extra little kick.

On to the main draw – one that I’m sure no one could possibly resist having previously read the menu online! The main course of “pork three ways” saw us being served pork belly and braised pig’s cheek – both slow cooked for 18 hours – alongside a black pudding croquette; side additions included celeriac cream, small chunks of pickled Granny Smith apple, and a long stick of pork crackling, as well as boiled potatoes. One word on this dish – DIVINE. The pig’s cheek and the pork belly both fell apart on cutting and were near melt-in-the-mouth, whilst the croquette was a nice third alternative; as someone that’s a black pudding fan, it was a rather fun and unusual way to have this. The light celeriac cream provided some moistness to the whole dish, whilst the boiled potatoes (bowls of which were distributed between us) were kept suitably simple, as to not overpower the pork delights.

By this point we were all rather stuffed – but who can say no to pudding? Preceding that was a welcome Sipsmith Gin granita, served in adorably cute mini kilner jars (the ones with a pop up lid) – with just a hint of gin and small pieces of frozen cucumber, this really was a fun little gin and tonic!

Dessert was a kind of deconstructed rhubarb crumble and custard – soft and hearty pink pieces of rhubarb mixed in with small rocks of crumble, topped with a fizzing custard that we were offered second helpings of from a squirt-y canister! A lovingly warm and satisfying way to round off the meal – before a cheeky offering of bright red, rhubarb and port jelly; a welcome “can’t turn this down” finale!

Overall, Fab Cuisine turned out to be a fantastically fun and social night with some truly fabulous food. Each course was distinct and overall the whole menu provided an assortment of flavours and dish ideas that came together well (be prepared to be truly full by the end!) At the start, Chef Fabrice had explained that this was the last of his winter menus – each event’s menu is seasonal – with the next outing (on 1st May) the start of spring dishes and ingredients. Fab Cuisine is a great way of sampling Fabrice’s culinary creations and finding out more about his background as a chef at top London venues.

Trying the whole Grub Club concept was also very enjoyable. It’s a little like attending a secret club – in fact, a secret foodie club (probably the best kind) – with a bit of an element of surprise in terms of venue, food and ingredients, and fellow guests.

I’d certainly highly recommend trying out one of the Grub Club evenings – and I can’t recommend Fab Cuisine highly enough! To find out more on Fab Cuisine and to keep tabs on the next event on 1st May at Maida Hill Place, please see the Fab Cuisine page on the Grub Club site: grubclub.com/fab-cuisine.