Earlier this week, the Evening Standard featured an article on the new, “improved” Circle Line. If you remember, back in December the Circle Line changed its shape to become a loop or spiral (I’ve also read it being described as a “snail”), starting its service at Hammersmith, joining the old Circle Line route at Edgware Road station, and then doing one complete circle to terminate there as well.

(There’s obviously a service in other direction too – London Underground haven’t quite become as mean as to make us travel in one direction only.)
The Standard reports that the Circle Line is now even worse than it used to be. Changes to the line have meant that it is less reliable – the number of trains in service has fallen from 93.2% to 90.4%, whilst the distance travelled by peak-hour trains has fallen from 90% to 87.8%. (These are all percentages of London Underground’s target number of trains and distance travelled – i.e. the number and distance that they should be reaching.)
As someone that (unfortunately) has to use the Circle Line everyday, I can honestly say that I’ve not seen any improvements to the service of the line since these changes have been implemented. In fact, anyone travelling through Edgware Road in either direction (for example, from High Street Kensington or Notting Hill eastbound, or vice versa) now has to change trains. This means an unnecessary addition to your journey time whilst you wait for your second train to pull into the station – or while you sit on a train, waiting for it to depart. I will admit, however, that I used to encounter some absolutely shocking delays on the old Circle Line which I’ve not seen…as yet. (Thought it’s only been three months, so give it time.)
The same article does mention something that I consider much more of a problem. Weekends see engineering works take place on a variety of lines on the London Underground, with the Circle and District Lines often partially or entirely shut. Whilst I appreciate that the works are necessary, in reality it means that travelling on the Underground during a weekend can sometimes be entirely hellish. Just a few weeks ago, I had to use the Central Line instead of the Circle en route to Kensington. With everyone piling onto the Underground lines that are open, they become ridiculously full; that day, several Central Line trains went by before I managed to get one. (For this to happen at 3pm on a Saturday, rather than a morning rush-hour, seems somewhat absurd). When our train reached Queensway, our driver suddenly told us that the next station, Notting Hill Gate (where I intended to change trains), was closed due to over-crowding*. Something I could readily believe, as everyone’s forced to use roughly half the Underground network that’s actually operational. I don’t know why, but it almost seems dangerous; another experience at Holborn station the following weekend was also exasperating because of the sheer number of people everywhere.
(*In the end, I had to walk from Queensway to Palace Gardens Terrace, get a bus from there to Kensington Church Street and then walk the remainder of my journey. Too much hassle!)
Article: Longer waits and fewer trains after Circle line extension (16th March 2010, The Evening Standard)
by Anna
Read More

The Evening Standard had a painful article a few days ago on Edgware Road Underground station. Painful because it’s very, very true.

Edgware Road station is outside the Borough of Kensington & Chelsea, but likely to be frequented by anyone travelling to or from it. On the Circle, District and Hammersmith & City lines, it’s an above-ground station with four windswept (and usually rainy) platforms that try and sort out the mess of these three Underground lines all joining together and vying for the same platforms. (It’s not to be confused by the nearby station of the same name that’s only on the Bakerloo line.)

I travel through this Underground station twice a day, five days a week as I go to and from work. Sometimes I’m unlucky enough to have to use it even more often, depending on my weekend plans. I also used to pass through the same station for two of more three years at university, as I travelled from Kensington to my university in Clerkenwell. Basically, it feels like I’ve spent half of this decade at this station.

Recently, the Circle Line underwent an extension. No longer a circle, it’s no more of a spiral as Circle Line trains start at Edgware Road, travel anti-clockwise round the normal route, reach Edgware Road again and then go onto the Hammersmith. The reasoning behind this is to make the Line more reliable with more frequent services. The Standard article says the new extension makes the line look a bit like a snail – I suppose it does, if it’s snail that’s trying to bury his head into the ground because he’s lost the will to live, as a result of having to interchange at Edgware Road.

The problem with the station is that it seems to totally work against any passengers travelling through it. If, like me, you need to travel from High Street Kensington or Notting Hill, you will have to change trains at Edgware Road now. Sometimes it’s a cross platform walk, other times you have to race up (along with crowds of other passengers) the stairs to get to platform one – trying to avoid the stationary passengers who stand around wondering why the train “Terminates Here” and where they’re supposed to go now.

Once you’ve nearly reached platform one there is, however, a high chance that you’ll hear the chimes of the doors of the train closing and then the train pulling away. Leaving you breathless from your madcap, death-defying run, and having to wait for the next train. 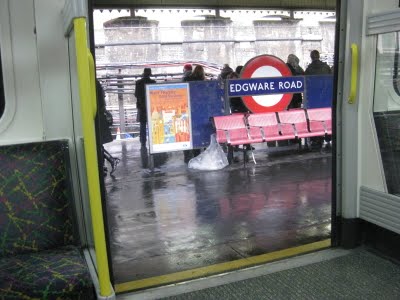 Sitting on a train at Edgware Road, hoping it departs…soon…

The reverse journey has more fun and games. As you pull into Edgware Road, you may well see two (TWO!) trains waiting there, a District and a Circle Line for your onward journey. You’re spoilt for choice! But that’s the problem -which train will depart first? At that point, ladies and gentlemen, is where you must summon your powers of prediction, as well as gearing up your fitness levels as you make a sprint up, over and down the stairs on the other side…before you then sprint back to the train you were on because you’ve figured out that it’s going to be departing first, after all.