I’ve written in the past about the wonderful SPID Theatre Company, the award-winning youth organisation that specialises in site-specific and promenade work. Their most recent local project, Kensal Voices, centred around Kensal House on Ladbroke Grove; this intergenerational heritage work marked the fascinating history of this Grade II* listed local landmark, whilst also helping the project’s young participants gain professional and creative skills. 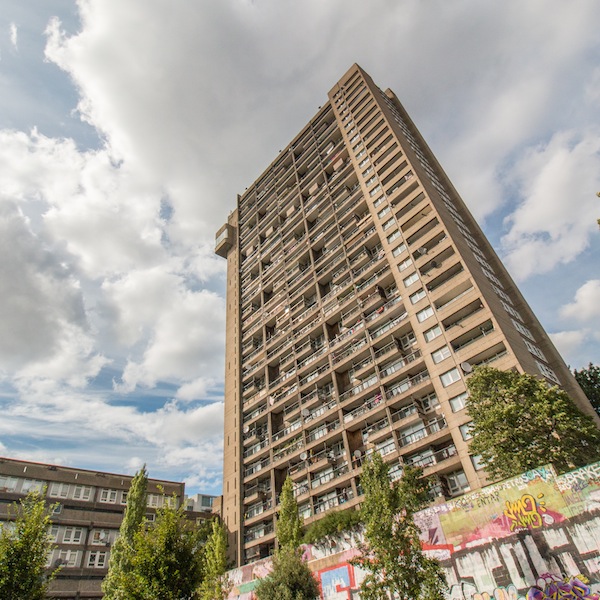 The SPID Theatre Company now turns its attention to another local landmark with an intriguing history – none other than the Trellick Tower. The year-long project Trellick Tales will celebrate the tower, its residents and their history through free weekly drama and heritage sessions for 13-25 year olds, as well as regular showings and performances – the first of which are on 26th September (1pm and 3pm).

Furthermore, the BBC have been attending the SPID Theatre Company’s workshops to collect footage and interview the participants for a documentary that will be part of their Inside Out London programme. 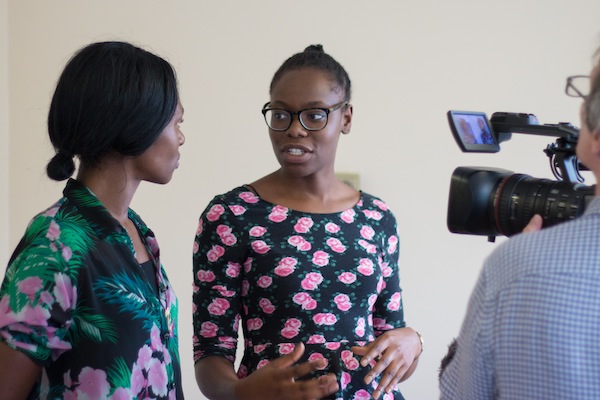 The young participants of Trellick Tales have been attending workshops run by the Oral History Society which has helped them develop interview and recording techniques. In turn, they’ve used these new skills to collected oral history testimonies from some of the older residents of the Trellick Tower about past estate life. These testimonies have been written into scripts to be transformed into short performances exploring the stories of the estate. 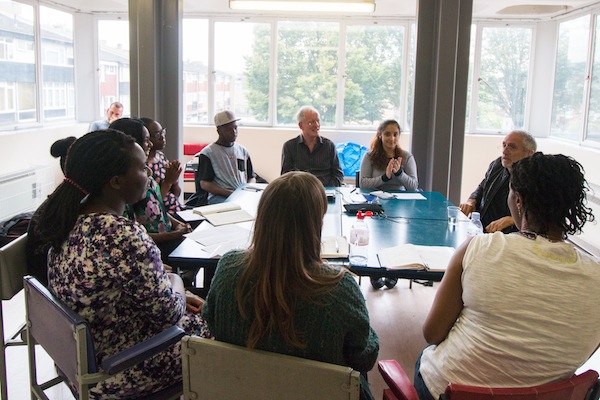 If you’d like to attend one of the free, short promenade performances taking place on 26th September, please contact the SPID Theatre Company to reserve a slot. You can do so on 07903 861674 or by emailing youth@spidtheatre.com leaving your name, phone number and which performance (1pm or 3pm) you would like to attend.

For more on the SPID Theatre Company and its work, please see www.spidtheatre.com or look them up on Twitter.

Anyone interested in the history of Notting Hill and its residents should take a look at this fascinating video on the formation of Notting Hill Housing. This housing association was formed in the early 1960s as a result of the appalling living conditions that some residents faced – alongside other social issues that immigrants were forced for endure. The video shows a different side to Notting Hill that some of you may not be aware of, especially in contrast to what much of the area is like today.

Marking 50 years since the association’s formation, the video features interviews with those linked to Notting Hill Housing including Ann Kenrick, daughter of the founder, Reverend Bruce Kenrick, and the Trust’s first Chief Executive, John Coward OBE. It is highly recommended viewing – take a look below:

I’ve previously written about Kensal Voices, a year-long intergenerational heritage project run by the SPID (Specially Produced Innovatively Directed) Theatre Company to assist and help young participants gain professional creative skills as well as marking the history of this Grade II* listed local landmark. Most recently, we wrote about the free guided tours of Kensal House that took place in November, which saw project participants (aged from 13 to 25) conduct fifteen minute guided walks in and around the different areas of the property. 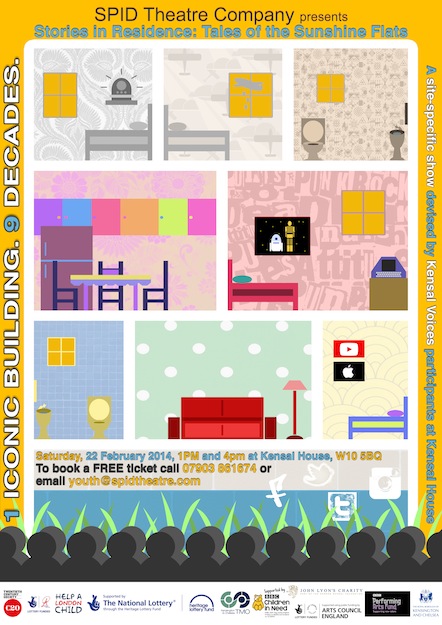 Now, the conclusion of the Kensal Voices project takes place on 22nd February 2014 – a performance entitled Stories in Residence: Tales of the Sunshine Flats. The show will see a mixture of live performances from the project participants and recorded interviews with former and long-time residents of Kensal House, telling the story of the hopes and dreams intended for the building and resurfacing some forgotten tales. Pop-up scenes will re-imagine past events all over the estate, from the celebration of King George’s coronation in 1937, to families experiencing post-war difficulties in 1951, through to cultural diversities in 1974. Emerging back in 2014, the audience will then be able to celebrate and share the achievements of the Kensal Voices participants’ achievements since the project was started in April 2013.

Over forty young people have worked on the project since its launch, exploring the life and times of Kensal House from its opening in 1937 through to the present day. Having been assisted by industry professionals from many different disciplines, they will leave behind an impressive legacy – including a brochure and an original music track inspired by the building; and valuable oral history testimonies of residents, which can be experienced in this final production. 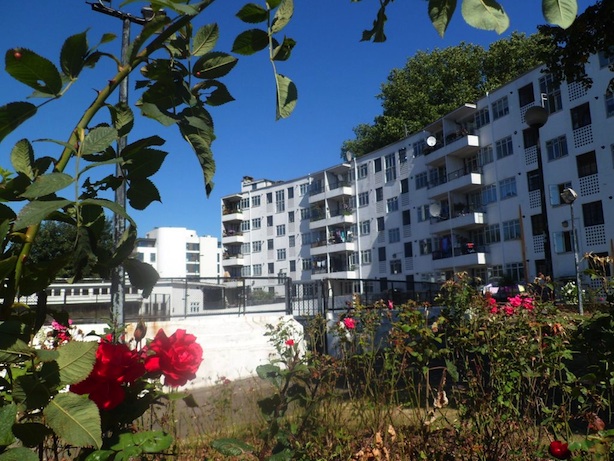 Having personally also joined one of the above-mentioned tours that took place in November, I can thoroughly recommend taking the time to see what the project’s participants are doing, as well as learning more about Kensal House itself, by attending this final production. I clearly wasn’t the only that enjoyed the November tours – some of the outstanding feedback that they received included:

“Absolutely delightful. Beautifully organised, everyone was very helpful and well informed.”
“Really great to come into Kensal House and to meet the confident and informed tour guides.”
“Tour was excellent- so impressed with knowledge and manner of our tour guides.”

A Q&A session will also take place after the second performance of the day – experts from the fields of architecture and performance will be speaking, including Dr Elizabeth Darling, Reader in Architectural History at Oxford Brookes University and author of Re-forming Britain: Narratives of Modernity before Reconstruction (2007); Gurmeet Sian, RIBA Chartered Architect from Office Sian based in East London; and Professor Sally Mackey, Professor for Applied Theatre and Performance at the Royal Central School of Speech and Drama.

To book a FREE ticket for a performance, please do so online, or by calling 07903 861674 or emailing youth@spidtheatre.com.

As part of the Kensal Voices project, a series of Kensal House guided tours will take place on Saturday 30th November from 1pm to 4pm giving members of the public a wonderful opportunity to view this Grade II* listed building which was designed in 1936 by architect Maxwell Fry and social reformer Elizabeth Denby.

The Kensal Voices project was launched in April 2013 by the SPID Theatre Company, and has seen more than 30 people aged from 13 to 25 take part in various aspects of work celebrating and promoting Kensal House and its nine decade-long history. This year-long intergenerational heritage project has also been run in collaboration with the Victoria and Albert Museum and the 20th Century Society, as well as being funded by the Heritage Lottery Fund.

To help them develop these tours, the project’s young participants undertook extensive research and interviewed the residents of Kensal House. Other aspects of the Kensal Voices project saw them engage in journalism, design, multimedia, film, drama, music and architectural workshops run by industry professionals.

These interactive and performative tours will take place at fifteen-minute intervals in groups of up to five people. The tours will provide fascinating insights into the architecture of the estate and the social ambitions of the developers, as well as highlighting some of the forgotten stories of the building and its residents.

“In such a short time, I’ve met so many lovely, inspiring people who support and encourage me to learn and develop new creative skills.”

The SPID (Specially Produced Innovatively Directed) Theatre Company has received a number of awards since it was founded in 2005, including the First Light Award for Best Animation 2013 for the short film High Above the Sky. Its most recent production iAM will be touring schools for free in December. More details on the company can be found on its website www.spidtheatre.com.

Tours are free, but it is essential to book a slot in advance. To book a place, please call 07903 861674 or email youth@spidtheatre.com.